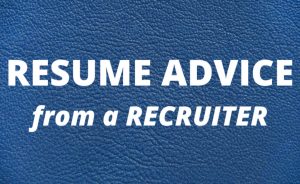 This article provides resume advice from a recruiter and is the first part of a two-part series featuring an interview I had with career coach, resume writer, and former executive recruiter Andy Gardner. Andy is Managing Partner of AGA Executive Career Coaching. This interview was part of my recent engagement with recruiters to gain their perspective and insights so I can better guide job seekers who may work with recruiters during their job search campaign.

Please stay tuned for part 2 of my interview with Andy, in which we’ll cover different types of recruiters and his suggestions for how to work with them.

Heidi Giusto: So many job seekers want to hear resume advice from a recruiter. What makes a resume compelling to you?

Andy Gardner: There are a lot of factors, but to me one of the most important things is that the person is genuinely a good fit for the requirements for the position—not just because they could rise to the occasion, but because they fulfill all the requirements and have significant accomplishments that are backed by hard, quantifiable data. This is probably the most important thing beyond their responsibilities. I am much less impressed with soft skills, particularly when they are not backed up by quantifiable data but are in essence the applicant’s own opinions.

Heidi: Would you say professional development is valuable evidence to demonstrate soft skills? For instance, if a person claims “leadership,” and you see that they have completed an executive leadership program at Harvard, Stanford, or any other well-regarded institution, do you consider that evidence?

Heidi: That’s my view, too. But I was curious to hear yours. Thank you.

Andy: When I was recruiting, I didn’t respond with great interest to a person’s list of soft skills—such as leadership, dedication, good team player, communication skills, and so on—unless they were supported by accomplishments. And sometimes they even just say, “I have great oral and written communication skills.” That is almost meaningless. I would prefer to make that judgment call myself, if I choose to interview them.

I’m very interested in the person’s career history. Has there been a steady progression of positions of increasing levels of responsibility over time? I don’t like employment dates that are limited to the years. I strongly prefer specifying the month and year in each date, because a person could be obscuring something, like being out of work for eleven months. It’s not clear, because if one job ended in January 2021 and the next job started in December 2021, but the resume listed years only, both events would be described as 2021. You don’t know whether there’s a large gap or a small gap, and gaps were very important to me when I was recruiting.

I focus on transitions in my interviewing. I like to know what led to a person leaving Company X and going to Y, and then from Y to Z. I want to find out if there’s a pattern of job hopping or moving from one industry to another.

I don’t like functional resumes because they can create the impression that an applicant may be trying to hide something in their job history, such as a series of short-term positions, a shift to different industry sectors or types of positions, or steps backward. The mantra that I used to live by was past performance is the best predictor of future performance.

I also like the idea of a Keeper in resumes. You know, if you fish, and you catch a big fish, you keep it. A Keeper is somebody who was kept when the company had cutbacks; or, when the company was acquired, they were one of the people who got moved to a job in the new, combined entity. Or their boss left the company, then recruited the person to join their new company. These are all Keepers. If a resume has that, it means a whole lot more to me than things like “I am creative, dedicated, self-motivated, a great team player, etc.” Those self-descriptions mean little or nothing in comparison to the three examples that I just gave, which speak for themselves.

I feel it’s also important that it be clear when companies are acquired. If the individual went from Company A to Company B, but Company A was acquired by Company B, then my recommendation is to use parentheses to indicate the acquisition. For example, in this scenario, the two jobs could be grouped together as two positions at one company: “Company B (formerly Company A).” Otherwise, it can look like two different jobs for different companies, when in fact, it’s just the opposite: the individual was a Keeper and got promoted.

When I was recruiting, I didn’t respond with great interest to a person’s list of soft skills—such as leadership, dedication, good team player, communication skills, and so on—unless they were supported by accomplishments.

Heidi: I find that too, even when the company has the same name. If you’re doing a quick scan of the resume and the applicant has had, say, four promotions at the same company, but each entry is formatted in a way that the company name isn’t prominent, it makes it look like they are a job hopper because they created separate entries for each role. It’s more work for the reader to piece together the fact that the roles were all promotions at the same company.

Andy: Yes, definitely. And, as you know, with lower-level positions, it may be an applicant tracking system or a frontline, junior recruiter who is doing the scanning. They don’t have much time to spend on each resume.

Heidi: Tell me about when and how you read cover letters—and what stands out to you as a good one.

Andy: Nebulous, soft skills in a cover letter don’t carry much weight with me. If an applicant submits a cover letter, it should definitely be unique to the position. Certainly, don’t send a cover letter that’s generic—one that you use for all positions: “I’ve been doing X, Y, and Z. I’m now ready to look for a new position and am enclosing my resume.” That’s not a good way to go. If you do include a cover letter, use bullet points that demonstrate that you took the time to conduct research about the company and the position, and that you customized your cover letter. Show that you did the work.

Heidi: I think the cover letter’s importance can vary by industry and field. I find that for employers in mission-oriented organizations, the cover letter can show alignment with that same mission. Applicants can dive into some things that might not be in their resume because including them in those one or two pages isn’t warranted. But for that particular organization, it’s important for the applicant to show alignment of mission.

For instance, I found it to be the case with research. In a cover letter for one of my clients, we built a paragraph around her graduate school research. For most roles, it would not have been that relevant, but we included it because it was so niche, and that’s what that company focused on. My client told me what she was told in the interview: that the paragraph in the letter is what jumped out at them. That paragraph was what drew them to her and led them to think, “Wow, you’re an expert in our area.”

When I work with people on cover letters, I acknowledge that they might get weeded out before someone reads their letter, but letters can help when a company is narrowing it down to a handful of applicants. In other words, a cover letter can help set them apart and help them get called in for an interview. Does this sound like a fair assessment from what you’re saying as well?

Andy: I agree with everything you said. And the example you were describing shows that the person did research into the company and understood the mission in greater detail than what the company’s website may have provided. It’s clear that that cover letter was unique and that the applicant took the time and the effort to understand the company and the position fully. There are a lot of reasons why that would be successful.

Heidi: I tell people cover letters are the most annoying part of the job application process because they can’t be sure if their letter is going to get read. But some employers have told me they will not interview a candidate if they don’t submit a cover letter. Their reasoning is that if the applicant doesn’t care enough to submit a cover letter, they don’t want to talk to them.

Andy: At many larger companies, companies using contingent recruiters, and companies recruiting for positions below the Director level, resumes can be scanned very quickly, but the cover letter is not as important in the initial evaluation process. It may be scanned by an ATS or reviewed by somebody very junior. I’d be surprised if people would automatically get weeded out in any of those situations simply because they didn’t write a cover letter. It also depends on the economy. If an employer is getting 200 resumes in response to a job posting, a cover letter might distinguish you, but the employer is probably not going to have time to read it during an initial review of all applicants.

Heidi: There is so much to consider on the topic of resumes and covers. Andy, you covered a lot of ground. Thank you for sharing your expertise and insights to help job seekers who are looking for resume advice from a recruiter!

Are you feeling like you’re running on empty? Consider looking to motivational quotes to keep…

Not too long ago, I attended an in-person event at a middle school—an honor society…

10 LinkedIn Hacks That Professionals Should Know